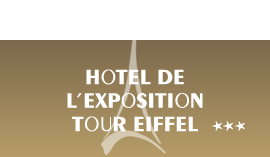 In a quiet street in the 15th arrondissement of Paris, the building that today houses the Hotel de l’Exposition was built in the 1870s and was originally a boarding-house, of which there were many at the time, before becoming furnished apartments at the end of the 19th century.
When the Eiffel Tower was being built nearby, the street was converted to provide lodgings for the site workers and the architect Gustave Eiffel stayed in this building on several occasions between February 1887 and March 1889.

Paris, of course played host to a number of Universal Expositions between 1855 and 1910, and then in 1937, as well as two other major expositions (in 1925 and 1931) which, although not “universal”, also deeply marked the history of the capital. Although ephemeral, all these expositions have left lasting traces in the Parisian landscape, since it was through them that the city inherited a certain number of its major monuments, such as the Eiffel Tower, today the very symbol of Paris, but also the Grand Palais and the Petit Palais, the Palais de Chaillot and the Pont Alexandre III.

Flooded during the spate of the Seine in 1910, the furnished apartments became a hôtel with 30 rooms after World War II.
During this period and up until the 1980s, the building adjoining the hotel succeeded the famous CITROEN design office that created historic cars such as Traction, the 2CV and the DS.

Since 1963, the Hôtel l’Exposition has had thirty-six rooms.
Since then, it has been run by a number of different proprietors and was renovated on several occasions between 1978 and 2006.
Since 2002, the establishment has been run by Jean Louis Huray, who is joint owner. It was Mr Huray who was responsible for fully refurbishing the hotel, from 2004 to 2006, without losing any of the original character.